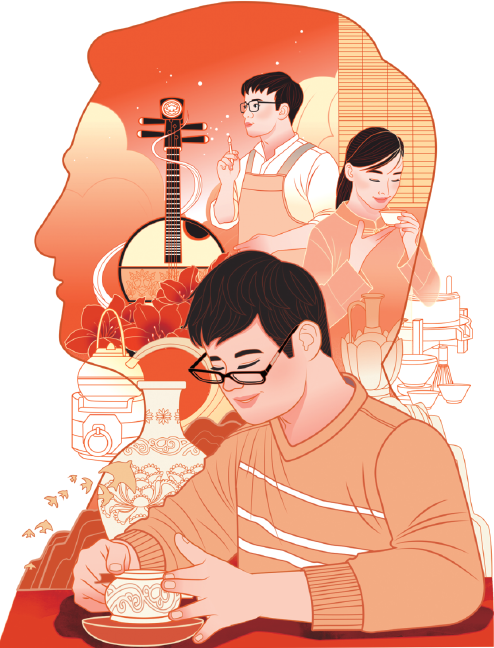 Blueprint calls for better protection of artworks and intangible heritage

The growth in traditional handicrafts has added momentum to socioeconomic and cultural development efforts across the country.

Many have become treasured items of intangible cultural heritage and their influence extends to various aspects of modern life, including education, tourism and rural revitalization.

Its goal is to identify connection points between traditional culture and modern life and then promote the high-quality development, sustainable protection and use of traditional craftsmanship.

According to the blueprint, a national mechanism to preserve traditional craftsmanship will be established by 2025. Tailored policies supporting different types of craftsmanship, as well as professional management and creative ideas will be adopted in the process.

In particular, businesses exhibiting core competitiveness in traditional craftsmanship will be encouraged to make use of modern technology and management methods to raise production efficiency.

They will also be advised to differentiate hand-crafting and production processes to satisfy consumer demands and turn themselves into upscale brands. Support will be given to help businesses innovate and set up independent hand-crafting production lines to raise the value of handicrafts and diversify offerings.

The blueprint also supports efforts by micro and small businesses and intangible cultural workshops to provide traditional craftsmanship training and create job opportunities for rural revitalization. Cultural companies are expected to take on traditional craftsmen to work in production.

“The blueprint has paid close attention to industrialization and marketing for the high-quality passing on and development of traditional craftsmanship,” said Shi Meiyu, a professor at the Tourism College at Beijing Union University.

Shi has been focused on the study of intangible cultural heritage and tourism for many years.

“All the major links in the chain are mentioned, and the connection between traditional handicrafts and modern life has been clarified,” she said.

For the first time, specific guidance and support has been offered for different items of intangible cultural heritage, which is good news and will help make related policies more pertinent, she added.

“Intangible cultural heritage is a broad category, and traditions that are not suited to the modern market should be properly preserved and documented,” Shi said. “But those that have relatively large market potential should be commercialized.”

According to Shi, one highlight of the blueprint is its advocacy of separating handmade products from those created using machines.

“We can make authentic handicrafts a pillar product, while using elements of intangible cultural heritage in the mechanized production of creative items to enrich the tourist experience,” she said.

Shi also hailed the blueprint’s attention to the integration of business, academic institutes and inheritors of traditional handicrafts.

“It will allow all parties to play to their strengths and lead to better development,” she said.

As the blueprint revealed, there will be greater emphasis on the digitization of craftsmanship, and national-level criteria for this process will also be released.

At the moment, digital technology remains an auxiliary approach, but it is gradually helping to improve the products and methods of traditional craftsmanship, said Yao Zhihua of the Jiangsu University of Technology.

The continuous application of technology will surely help systematize the protection and passing on of traditional craftsmanship, and make it sustainable and orderly, Yao said.

A few days after the blueprint was released, Sichuan province announced that it planned to build some 50 intangible cultural heritage protection and inheritance facilities of provincial level and above by 2025.

Local authorities have received more than 20 million yuan ($2.9 million) from the central government to train inheritors through special programs over the years, and inheritors have also been encouraged to participate in events to enhance exchange and broaden their artistic vision.

Liu Jiang, an inheritor of provincial bamboo weaving, had some of his pieces displayed at an international craftsmanship innovation expo in Paris last month.

Liu also had the opportunity to exchange ideas with fellow artists at the expo.

“My eyes were opened, and the path toward integrating traditional craftsmanship with modern life has become clearer to me,” Liu said.

Now in her 60s, Yang has created her own distinctive style of embroidery that blends Tibetan weaving, cross-stitch and Qiang embroidery techniques.

By using the traditional colors of the Tibetan and Qiang ethnic groups in her craft, she has become a muse for many global brands, among them Japanese cosmetics brand Shu Uemura and United States coffee chain Starbucks.

Yang said that she realized that by obtaining an intellectual property right, her pieces would not only be worth more but would also enable rural craftsmen like her to reach a wider audience.

Zhang Xuefang, an official from the Hebei Culture and Tourism Department, said that the blueprint will have a far-reaching effect on provinces that have a strong tradition of craftsmanship, like Hebei.

It will give traditional handicrafts a bigger role in assisting rural development and boosting the profile of traditional culture, Zhang said, adding that the blueprint’s detailed measures, coupled with the cooperation and coordination of the 10 government organs involved, will ensure its directives are implemented efficiently nationwide.

The projects are expected to raise some 43,000 residents out of poverty, he said.

“Hebei will carry out the blueprint’s requirements, improve policies and explore the implementation of a steady and effective multi-departmental coordination mechanism,” Zhang said.

在线股票配资China’s scientific research climbs to No 1